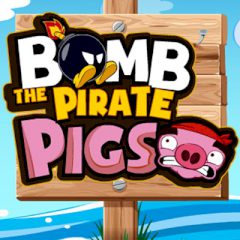 Could you believe that? Just imagine that pirate pigs have invaded the island! And you are the only one, who can destroy them all! You will have to use each bomb's special ability to destroy the pigs and collect the stars along the way. Be ready to fight your enemies, score points, collect stars, and become the best commander ever. Just use each bomb's abilities as best as possible, and destroy all the pirate pigs who've taken over the island. Be sure that you will solve all these puzzles. So, just have much fun here.

Help the Potty Mouth Ninja collect some coins so he can get an Asian massage. But beware of the Ninja’s sworn enemy… THE PIRATE!...

Aliens attack the base! There are so many of them! Your task is to protect the base and kill all the intruders! Aim well and kil...

Arizona Rose and the Pirates' Riddles

In this game you have to find everything that is expensive! Guess what! Yeah, the real treasures of pirates! Cool! So, let's pla...