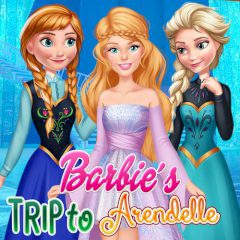 Barbie has never been to Arendelle, the place where her friends live. They are going to make her trip full of emotions, so the first thing to do, is to make sure she will look like a true resident.

Barbie has been to many places around the world such as Paris and New York, but she has never been to Arendelle. That's strange, because considering her friendship with Elsa and Anna, she should have known everything about the place. Well, time to change this and take a trip to Arendelle. Dress upo to look like a real resident and take a walk!

Play Mystery at the Tremont

Mystery at the Tremont

Play Nickelodeon Back to School Search

Nickelodeon Back to School Search