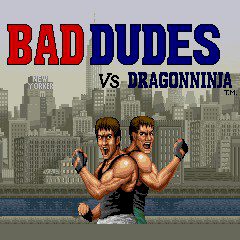 Bad dudes are unwanted in the modern society, but when something extremely dangerous happens they are in need. Saving the president is their main task for now!

The president is the number one person and when he has been kidnapped by ninjas the state became uncontrolled. Now ninjas can demand whatever they like and no squad can release the president because ninjas are prepared for the assault. When the strategy is plain you should act unpredictably, that's why bad dudes exist.