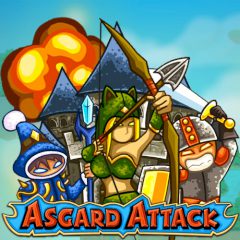 Oh no! Goblins are amassing an army and attacking Asgard and the war has begun, but we have teleporters that can zap our troops right to the front lines for just a smattering of gold. By the way, with plenty of band the strongest of gods on our side, surely the kingdom is in good hands and you can choose to summon in warriors, archers, mages, and healers, and direct them where to go with a simple click of a button to stop the fiends from following the path to your kingdom, marked by blue flags. Just create buildings in town to get even more upgrades using stars earned by finishing levels.