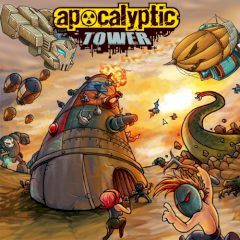 Apocalyptic world is not the best time for humans to fight, but the lack of resources makes humans mad. This greedy scum wants your tower, but you won't give it away without a fight.

After the apocalypse, you thought that there is no chance that thing could get worse, but suddenly you saw a man right in front of the gates. He demanded you to leave the tower, but without it you will just die. Accept the fight and defend the walls of your tower building turrets and summoning the troops. Spend your funds smartly and they will never get you!