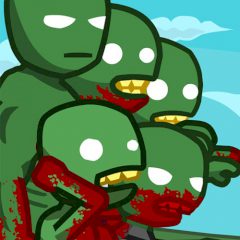 Are you afraid of zombies? Then this game is for you! The main thing is to kill all the zombies here and just use the anti zombies bunker. Be sure that you will love this game. Everything depends on you right now. Enjoy the game.

Just imagine that you are a zombie manic, so you build an anti zombie bunker, other people think you’re crazy, until one day zombie appeared out of nowhere and started attacking everyone and will capture the world. By the way, your bunker has weapon attach to the top, your job is to defend against incoming waves of zombies, by shooting them down and blowing them up. So, just earn money after each day, and use it to upgrade your equipments to better fortify your bunker and stay alive as long as you can. You will cope with it!

Play Before the Dawn