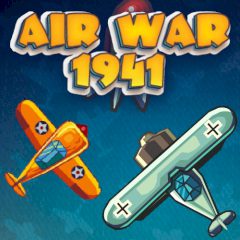 Do everything to control your jet plane. This is a real war, so you must be very attentive and careful. One mistake, and you are dead. Use the mouse to control and shoot all the time. Have faith in yourself and we believe that you will stay alive!

Welcome back to the dangerous past... to the second world war. Here you will be as a pilot of jet plane. The open skies are your battlefield in this scrolling shooter game. Pilot your fighter plane as you engage enemy aircraft in thrilling dog fights. Collect coins and medals which you can use to upgrade your plane with new weapons and abilities. Featuring 10 increasingly challenging levels, who will win the battle for air superiority? To control use your mouse and Z to use bullet explosion, X to use rockets. Is everything clear? Then let's play it! Have much fun here!

Try to survive and kill all aliens. These terrible creatures wanna to kill you! Just survive! At any rate! And have fun, of cour...