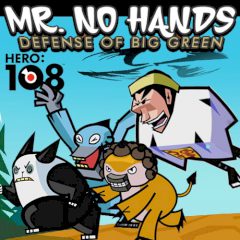 Help Mr. no Hands to build the ultimate defence of the Big Green and place the turtles to stop the invasion. Choose the weapon type and the ammo to stop various creatures before they reach the building.

Mr. no Hands won't let anyone to damage the major building of the Big Green, so he has placed the turtle defence to stop the invasion of hostile animals. Each type of an enemy unit is weak to something and you can deal with them using tricky strategy against the enemy army. Choose the weapon type and the type of ammo to blast off their best combat units!