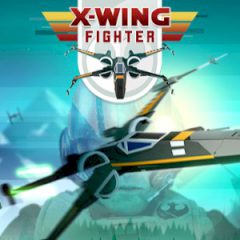 Have you ever wanted to help the Resistance during the interstellar war? Get into your fighter and eliminate as many spacecrafts as you can. Charge the laser and shoot!

Take a straight participation in the Star Wars battle. The Force Awakens and you must help the Resistance during the single fight. The planet is being surrounded by the enemy troops, which exceed you in quantity. However, your skill is something they can't be prepared to. Show everything you can.