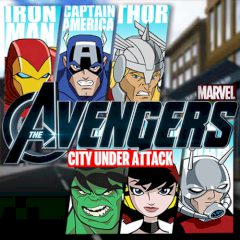 The enemy army is already in the city and the assault will begin soon enough. Thankfully, you were warned long time before it so you came here prepared and armed. Kill enemy troops and save the citizens.

The Avengers spend their time and effort only on solving problems that regular forces can deal with. They are almost almighty, but their squad consists of only several members and they can't be all in one spot, so there are cases where there is only one member you can rely on. Defend the city and kill your enemies before they damage the buildings.

Kill as many people as you can....