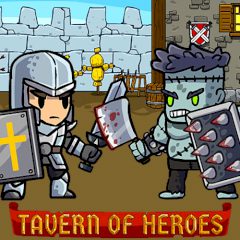 The King is dead and there is no heir that will claim the throne. There are halls full of treasures and goods and nobody can touch them before the new king will be crowned. Can you become the king?

The Kingdom lost its King and now nobody can rule this land. There is no heir to the throne and all treasures of the Kingdom are now untouchable. Somebody should rule the Kingdom, but there are many people who have claimed the crown. With the best intentions you decided to try yourself in this battle, but first you need to assemble the team for your adventures.