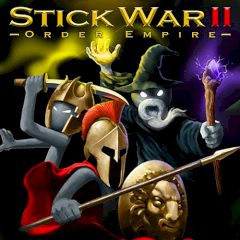 Be sure that you will be the real warrior and help your best characters to survive in the war. You will use all the hints and just set the best record in such a cruel world. You must be very careful to stay alive and earn some gold.

You will take part in the most exciting war, where you will have to control the real stickmen. Well, the current Order Empire alliances and their leaders called you to defeat hordes of rough rebels in the second sequel of the unique strategy game Stick War. That is why this is your chance to build and command your troops to fight against other stickmen while mining resources. Are you able to help them? Then do not waste your time and try to win all battles to restore the peace. Enjoy Stick War 2: Order Empire immediately and have fun.