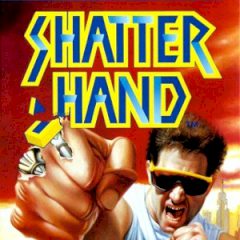 The Shatterhand is the ultimate cop who seeks for injustice and punishes enemies who break the law. Use your mighty fists to kill enemies and various robots on your way.

The Shatterhand is the toughest cop in this city. All villains and city scum afraid of him because of his mighty fists. He breaks iron with them, so even robots can't do anything to our hero. Run thought the levels destroying robots and other obstacles, collecting badges that summon protective drones. Don't make hostile robots stop you!