Oni Yu Can Scare Them 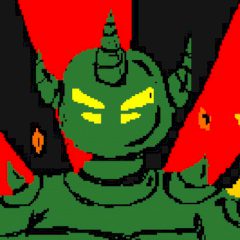 Oni Yu Can Scare Them

Brrr! It is so scared! You will play as a very dangerous and awful creature, who can turn into any other objects. As you have already understood, just scary others and win the game. But avoid some scary creatures too. So, enjoy the game... if you can.

You will be really surprised from what you should do! Just use the arrow keys to move and A to jump, your goal in each level is to scare all the people by possessing certain things with S, which allows you to move the object around. It is so scared! The thing is, some characters are dangerous and you can move only when they do not see you. Though dismounting ladders is fiddly and the unpredictable character movement can mean a lot of waiting and fiddling around at times, this game is really fun.