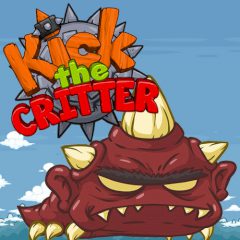 This is an aimal of unknown species. He's very angry, but he really wants to lean how to fly. For this he is using a big catapult which kicks him high into the air. Your task is to help him faster and higher with each new move. You will be able ro buy upgrades when you'll have money in this flash online game.

No one knows which species of animal this critter is. We see only one thing: he doesn't want to go away and wants to capture the kingdom. Are you ready to help him launch himself from a big catapult and fly as far as he can, destroying enemies, overcoming obstacles and collecting coins in this flash action game. If you want to have some fun, this arcade game suits you perfectly, because this is a great opportunity to train the speed of your reaction.