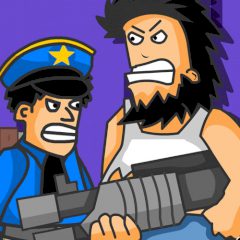 He came back and now his task is to do everything to avoid all the cops and stay alive! You will be really surprised from what he can do! Control Hobo and fight against police! Use all the tips and try to survive. Anyway, here you will have so much fun!

Wow! Our famous fighting hobo is now a wanted man. And he must fight off the cops and more crazy stuff in this third part. Pick up objects to fight your enemies and unlock special moves! Use the arrow keys to move, A to punch and pick up objects, S to kick and stuff. That is why, he has another troubles with the police, which says, that he cannot escape from prison and live freely. He must back to prison and they help him with that. Anyway, Hobo has own opinion for it. Give up it, and be arrested will not the way after which he will go.

Play You Broke the Game

You Broke the Game

Play The Adventure of Finn & Bonnie

The Adventure of Finn & Bonnie

Deal with monsters. Travel through time....