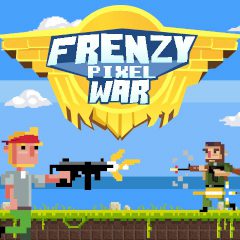 Face all enemies at once and try to survive the run. Jump over the gaps, shoot your enemies with a gun and reach the helicopter in the end. Don't waste your lives without a reason.

This game is the absolute madness! The main character finds himself right in the middle of the enemy territory with lots of armored men around. With only a tiny gun in his hands, he should deal with various troubles on his way and reach the rescue chopper on the cliff. Can you lead him through this madness?

This game gives you a nice chance to check your skills as a warrior. Enter the room and play with other people. Good luck here!...

Sing up for this cool game and shoot like the warrior! Take your gun and be ready to kill all foes on your hard way! Enjoy it an...

In this game you will face to so many troubles and foes. Take your gun and shoot like a professional. Enjoy the game....