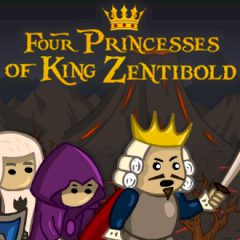 In battle, there are two kinds of people who retreat: cowards and people who have to use the restroom. Don't judge, you can't help when nature calls. But in 'Four Princesses of King Zentibold', you're a king, so you have people to go to the bathroom for you! Command armies comprised of nine heroic classes, including warriors, mages and archers, and fight in epic boss battles across four campaigns. It's immersive, grid-based warfare with a puzzle twist. The princesses are counting on you, so don't chicken out!