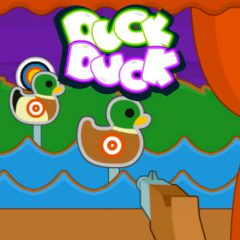 Shoot as many ducks as you can, as long as other targets and gain points. With each following level it will become harder to shoot all targets as they appear for a shorter period of time. Can you set the best score?

The shooting range is full of ducks and other targets. They appear for a short period of time for you to shoot, but if you miss it, the game will be over. Each following level doubles the difficulty of the game. The game becomes faster, harder and the amount of ducks increases. Can you still land perfect shots and get points for it?

Play Duck Duck on the Loose

Duck Duck on the Loose