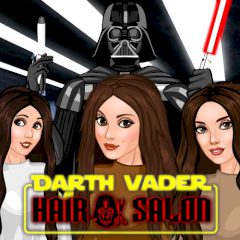 Darth Vader is a powerful Sith, but sometimes he gets bored on his ship. You just need to have hobbies in the space and he haven't thought of anything but a hair salon. Invite the Star Wars beauties to visit it!

The Star Wards universe is an incredible place, but also dangerous and cruel. However, there are many good things out there, but we don't pay much attention to them. Have you ever thought about what was Darth Vader's hobbies? You would never guess! He was an owner of the most popular hair salon in the galaxy. Check it out and visit this place!

The hair salon service went wrong and now you need to fix it....