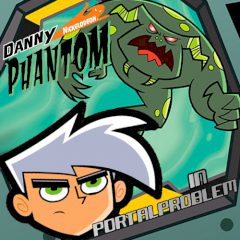 Danny Phantom stands in the guard of peace of the simple people. He can deal with any threat, but now he got into the portal full of hostile ghosts that are trying to kill him. What will you do?

The was an issue with the portal and Danny Phantom decided to fix it. When he entered the portal he saw many ghosts around him and they all wanted to kill him. Fortunately, there are bonuses that you can collect and they will help you to deal with ghosts and the level bosses. Use your blaster to kill the villains and disappear to avoid their attacks.

Play Danny Phantom. Freak For All

Danny Phantom. Freak For All

Freakshow, the evil, demented circus maniac, has escaped with the reality gauntlet, To maintain the world's sanity, this weapon ...

Face various ghosts and fight them until you get the energy pill!...

Help Danny's dad to test his Fenton RV and kill as many ghosts as you can....

Stop the ghosts that have crashed the prom night and save this evening!...

Just take care and make your monster, who is able to fight like the real warrior. We wish you good luck and have faith in yourse...