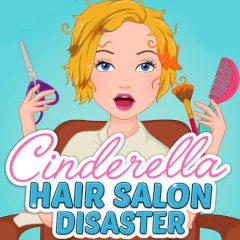 Disney princesses are often old fashioned and they barely fit the modern society, So, Cinderella decided to fix inconvenience and visit the hair salon for modern look.

The old fashioned Disney princesses often dream about modern look, but they can't change some things because people won't recognize them after. Cinderella can't stand the desire to change her hair cut and she went to the hair salon, but he got her hair burned and now she looks terrible. Fix that mess on her head and recover her hair.

Everyone has a hobby and Darth Vader loves to make haircuts!...