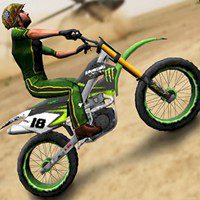 This is the best way to prove that you are the best bike driver. Just imagine that you take part in the real championship! That is why, we advice you to be very careful and attentive. There is no time to explain! Just control your bike and drive like a professional!

Have you ever had your own bike? Well, in this game everything is real! Just ride your bike through multiple levels held in different army base's whilst doing your best to jump over several army territorial equipment performing crazy stunts along the way. Are you already fascinated? So, the challenge is to keep control of your bike, judge your speed and time otherwise it is game over for you and show that you are the best driver! Use the arrow keys to move and space to jump. If everything clear then ride right now and show that you are the best!