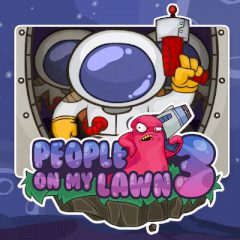 People on my Lawn 3

These aliens lived peacefully in their planet. But then came human from earth and begun the invasion of this planet. In this game you will join the army of aliens to help them to win in this battle. Get rid of these bad humans. Don't let them to capture you planet.

You like the adventures in space? In this case, this shooting physics game developed by A10 games is for you. You have a chance to visit the distant planet that suffers the invasion of humans. Your mission is to help them to win in this fierce battle. You will have launch rockets and destroy every man at each level to pass it. Use the different objects do change the direction of your shot. Attention, the quantity of rockets is limited. So think well before make a shot. There are a lot of levels with a lot of challenging puzzles in this game. Every next level will be more difficult. So you will have to show all your abilities and logical thinking to pass them. If you don't know how to pass a level, you can restart it and try to pass it again. So let the battle begins!

Games Similar People on my Lawn 3